skip to main | skip to sidebar

Floating Above the Andes

Amber writes:
The past few days have been completely inspiring and among the best days of my life. I cant think of a more action packed, adventurous, social day than yesterday! But I will start with where I left off. 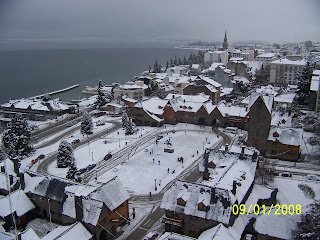 View of Barlioche centro from our room at Hostel 1004
After the storm passed in Bariloche, the sky opened up and *POOF*, there is the bright blue sky, the sparkling lake, the snow beautifully melting from the strong (and welcomed!) sun. Dad and I took advantage of the weather to go skiing at Cerro Catedral, one of the best ski resorts in South America. The views were stunning from so high up in the mountains.

As soon as I got back to the hostel some of my new friends I made at the hostel invited me out to dinner and dancing. Fine cuisine at an excellent Italian restaraunt we had all to ourselves - I had lamb ravioli (yum!) topped off with tiramisu. After that we went to a club they knew about and danced to live music. The singer was Argentinian, speaking in spanish, but performing American songs! He was great with his Latin American flare and charisma, especially with the Michael Jackson songs.

I´ve met so many interesting people, but it would take too long to describe them all. But let me just tell you about a few:

An Australian who took a little road trip with us, Emma is 20 and travelling by herself. She got her 2 year degree in event management but after she took an intensive yoga course in India she now wants to study Chinese herbal medicine.

Also on our road trip today was Gabriel, one of the funniest people I´ve ever met. Also an Aussie, he´s about 26, got a 4 year degree in Economics, was working a 9-5 job for a car company but decided to turn his life around, bought a one way ticket to Argentina and has been travelling for 2 weeks and plans to learn Spanish and stay for 6 months in South America and then move to England. His parents own a farm in Australia and are very Buddhist, and he went to a Buddhist boarding school in Dharmsala, India from age 10-16.

Another interesting character is Joe, a really intelligent guy writing a book and getting free lodging by working the graveyard shift at a youth hostel. Previously employed as a travel writer, Joe was inspired to live in a beautiful place and write a book about the recent downfall of American politics and economics. I read the introduction - it´s very provocative, I hope it gets published!

I also met a Kalise, a girl who goes to UCSB (what a coincidence!); Tony, a really cool Berkeley graduate (now a lawyer) who brought two pairs of skis with him to Bariloche; Annie, a star hostel employee who loves to cook snacks to share with the guests (yummy bread pudding!) and many others.

Lastly the person I want to mention is Javier, another employee at hostel 1004. He has many sides to his personality - at one calm moment, he is sitting with me, teaching me some Argentinian songs on the guitar. (He is a FANTASTIC guitarist.) A few hours later, he is the center of attention of the party, dancing like none other. I want to come back to Bariloche someday in the summer to visit Javier and Annie, swim in the lake (it´s too cold now!) and maybe work at the youth hostel 1004!

Ok, back to the summary: 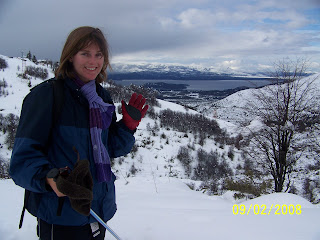 After our first day of skiing, we went again the next day as the weather was even better - but we decided to spice things up a bit. Late in the afternoon after a superb day of skiing (more of the lifts were open!) we went... PARAGLIDING! ON SKIS! We took the highest lift up the mountain and skiied/hiked over to the take-off point, met our guides there and set up the parachutes. My guide, Ernesto, had skiis on, so our launch was effortless. 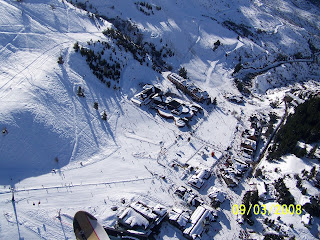 Paragliding! (See my ski in the bottom left)

Basically you ski off a very steep area and the wind opens up the chute and picks you up. The time in the air was smooth and stunning, an unbelievable moment I´ll never forget. Looking down at the lake, the mountains, the little people skiing, the chairlifts; reaching up and steering myself in the air, flying; It was just pure bliss. The landing was easy, too. 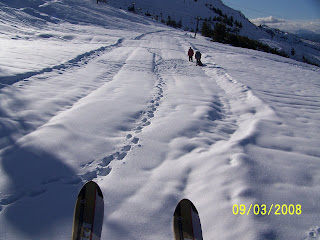 Landing on skis was easy, Kevin and his pilot await our landing. Cost was $80 each.

That night we went to part 2 of our ping pong club! It consists of mostly young kids ages 10-17 in the Bariloche community center with an instructor (another Javier) who organizes the drils. These kids have got some crazy talent! A couple of them beat me and a few of them managed to win a match (not a game!) versus my dad. (Dad and I were pretty good when we were partners at doubles!) I made friends with one of the older kids, Bruno, and found out what high school is like for him. He goes to school from 8 to 5 with a one hour break for lunch and takes 16 classes, I think, spaced out during the week.

After the ping pong was the hostel-hosted wine tasting party, complete with pre-wine homemade pizza dinner, dancing music, and disco ball. Everyone brought a bottle and was sipping wine and talking, and the talking turned into salsa dancing, which turned into an epic arm wrestling competition, which turned into all of the guys jumping on top of each other. Everyone was laughing and having a great time. Dad and I were swing dancing. 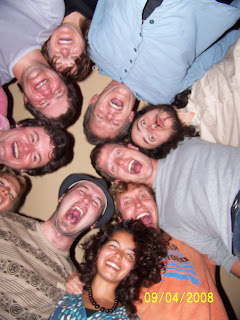 It´s late! Time for bed. Today we rented a car and drove from Bariloche to El Bolson. Beautiful drive - but more about that tomorrow.

I happily acknowledge Kevin's email and Amber's blog entry. I'm grateful to both of you busy travellers for taking time out from your peripatetic existence (that must sometimes be exhausting) to find the time and energy to write and places to send home reports electronically from exotic and distant places. It's amazing to learn about your escapades shortly after they occur. We were delighted to receive the postcard you sent us from Chile, showing you (?) climbing a steep snow slope on Aconcagua, but it took two weeks to get here, during which you have been hither and thither and have logged and blogged many thrilling exploits. Among the peakest, it seems, was paragliding on skis. That is something, like scuba diving and bungee jumping, that I have never aspired to do, but I'm INspired to learn that the two of you wanted to do it, did it, enjoyed it and survived unscathed. Onward and upward (and safely back downward)! All those front yard ping pong games paid off at the local kids sports club where you showed them that you are both adept at this Olympic sport, lunging, moving, slamming and returning slams. Bariloche seems to have been an excellent place to visit for you. And the hostel hosted a tasting event! No wonder Am wants to come back some day and hopefully visit her new friends, such as Emma, Gabriel, Joe, Kalise, Tony, Javier and Annie. But it's time to move on, to another great hostel, in mysterious El Bolson (not in my Atlas) with other adventures planned. Enjoy! Blog! Come home safely and soon! Love from RWY